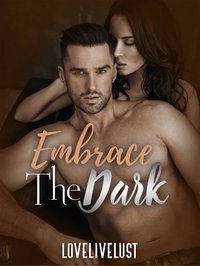 Her mother had passed away, and her father abandoned her in front of the orphanage because she was different. She was being bullied by other orphans because she could see dead beings. Until one day she was adopted by a couple that loved her until their tragic accident. When her stepbrother came back to take care of her, he actually felt something for her. What will he do with that realization and will he help her with all her fears?

Gloomy... that was how I would describe the orphanage. For the three years I was there, lots had come and gone before me.

Ms. Margaret said that I was special, that I was still waiting for the special parents to arrive.

I was five years old when my father left me on the porch of the orphanage. His last words were that he was going to buy some bread. He told me to stay there so that I could rest my feet. He left me with my favorite teddy and backpack. He hugged me and told me to knock on the door when I get tired and he had not yet returned.

Well, he never did return and I had been at the orphanage because I was abandoned by my father. My mother died on me and he couldn't take care of me, since I apparently could see the dead.

"Dear Lillian according to the letter, your father has left you with us. He believed that he couldn't give you the best care without your mom who had recently passed away, because of her illness."

Ms. Margaret took me in that day, she feeds me and put me to sleep in a warm bed. Explaining to me that she would take care of me like she takes care of the other children there.

He leaves me behind.

I finally cried myself to sleep that night.

"On one special day Lillian, you and other children in this orphanage will be adopted by a special family. And you will have a new mother and father, and you will live happily ever after."

That was three years ago. I guessed my special day hasn't arrived.

It was Sunday morning when Ms. Margaret and her colleagues gathered us in the main hall for potential parents to visit and introductory. I counted two sets of parents looking at us, I stayed in the background, to bite back I would be disappointment for not being picked.

There were another two behind me, I could smell her perfume. It smelled nice. She smelled like summer flowers. They were sorry for being late, she touched my shoulder and gently excuse herself to join Ms. Margaret and the rest of the group.

I was at my usual nook by the window drawing my life away, when suddenly one of the girls fell and slipped in front of me. She was embarrassed and accused me that I had made her fall.

I knew her, she had several times had it in for me. So I just shrugged, and never minded her. But that made her even more upset and pulled my hair, she made me fall from my nook. I was crying but I didn't fight back, I never fight back. Not since my father abandoned me. I had nothing to fight back for.

I was never close with the other children. Maybe because I would wake up at night, screaming with nightmares, and sometimes I would stare at a wall for the longest time.

I sleepwalk at night, I would get up and leave the room, and just stand in front of the wall for hours. I would pound my head against the cupboard while sleeping, making other kids woke up screaming. Until later on, I was put in my own room away from other children at night, just to keep the peace. That room was situated at the end of the hall.

One of the parents came to me and separated us. A woman cradled me and took me into her embrace, making me inhale her scent. The summer flowers. I took in her comfort, for however long they might be until she went away.

Another hour passed, and Ms. Margaret approached me. She was telling me, that she would like to speak to me.

"Did I do something wrong Ms. Margaret?" my hands started fiddling with my pencil.

"No honey, you're perfect as always." She sighed at me, her eyes were a bit teary making me reached out to her and hold her hand.

"These nice couples here would like to adopt you, Lilian. I already told them about your condition, and they still insisted that they wanted you to be part of their family. This is it Lilian...this is your special day, these are your new parents." Her words hang in the air.

Then suddenly the woman came to me and took my hand in hers. "I've always wanted a beautiful strong little girl, we've been searching for the perfect one. And then we saw you..." Her husband was kneeling beside her, and took my other hand "Lilian sweety...will you let us adopt you, and be our daughter?"

I just smile and nod.

In the car, they told me about themselves. Her name was Janet, his name was David and they have a son named Anthony, and he was eight years older than me. David told me that he was in financial business, and Janet was a stay at home mom.

They told me that Ms. Margaret had already informed them about my ability, they said that they would try to help me as best as they could.

Janet has a sister with the same ability, and that was why they were confident in taking me in. It was almost seven when we arrived, I clutched my teddy tighter.

Their house was huge, my jaw dropped. And Janet just laughed at my expression. "Oh Lilian, I know it's a bit too much, right? I told David that when he showed me the house." Then she hugged me, as David opened the door calling out for Anthony.

The boy came down the stairs, he was tall and lean. I never see older boys before, I just know them from watching TV but he was more handsome than the ones there.

The first impression, he was not pleased to see me. He just shook my hand and nodded, I didn't think he wanted to disrespect his parents.

We had dinner together, and then Janet showed me to my room. It was beautiful, with all the pink an eight years old need in their life.