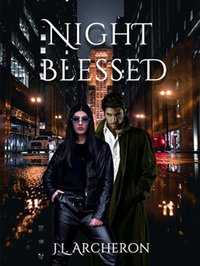 Half-vampire agent Emily Johnson, is working for the government, trying to rid the world of all the dangerous vampires that hunt humans at night. After nearly a decade of hunting down the evil bloodsuckers, she finally lands a case that she can't seem to solve.Then a mysterious vampire enters her life, throwing everything into chaos. Everything she thought she knew about vampires is questioned as she fights her feelings for him.When attempts on her life throw her into a bizarre partnership with the vampire, Emily must decide: does she fight the feelings and try to go back to life the way it was? Or does she give in and risk not only her life but the world as she knows it?***I froze again, my gaze on the glass door leading out to the balcony. It was like deja-vu all over again. A tingle went down my back at the sight of bright blue eyes staring back at me.Night Blessed is created by J.L. Archeron, an eGlobal Creative Publishing signed author.

I studied the body that was laid out on the ground before us, fighting with the anger that threatened to overwhelm me. Another day, another dead human.

I had been selected to work for the government at age sixteen. Since I was twenty—four now, to say that hunting down undead killers was getting old would be a vast understatement. No, that's not true. The one part of my job that I actually enjoyed was bringing those filthy bloodsuckers to justice. What was getting old was having to see dead body after dead body.

"Hey, Emily," a deep voice said behind me, drawing me out of my reverie. "Come here and check this out."

I turned to face Duncan, a member of my team and foster—brother, if you wanted to get technical about it. We'd been siblings since we were both thirteen, and even though he'd gotten taller and his blonde hair brighter, I could never escape seeing my brother, and sometimes my friend when we were on a case. He was always waiting over my shoulder for the one mistake that would end me. I followed his blue eyes to see a speck of white that seemed brighter against the dark asphalt on the road.

I walked over and squatted next to him, careful not to touch the ground next to it, which would still be considered part of the crime scene. My dark brown hair blew in the wind as I leaned in closer to see what he was pointing at.

"Part of a vampire fang?" Duncan interrupted me with a grin. "Why, yes. Yes, it is."

I stared at the fang, flabbergasted. This was a first. Vampires had many abilities; fast healing is one of them. They could regrow just about anybody part that got lopped off, except their fangs, apparently.

"Well," I said after a long pause. "This should make our guy pretty easy to find."

Duncan smiled at me as Andrew, our other team member, walked over to see what we had been studying for so long.

"That is disgusting," he said after a moment.

I grinned up at him, not for the first time noticing his looks, a stark contrast to Duncan's. He was tall as well, but that was where their similarities ended. Where Duncan was light in coloring, Andrew was dark: dark hair, dark eyes, dark skin. Add in the black shirt and pants he usually sported, and he nearly blended in with the shadows.

"It is," Duncan agreed with a shrug. "But it sure will make this case a lot easier."

I looked back at the body. It was that of a handsome young man in his twenties. His whole life was ahead of him, and it was cut short by a member of the undead. I studied him, fighting back the frustration and the sadness that threatened to take me over. He was exactly the type of human that the vampires went after. Young, handsome, and at one point he'd been full of the two things the vampires lusted after more than anything: life and blood.

Vampires had been hunting humans since they came into existence, whenever that was. And humans had been none the wiser, for the most part. Meanwhile, they were being hunted in the middle of the night, never to be seen again. There wasn't an end in sight for a very, very long time. Until now, that is. Now there's me and my team. For the last eight years, we had worked tirelessly to find the vampires killing humans without abandon and brought them our own brand of justice – a nice stake to the heart.

"What else do we need to do to put this scene to bed?" I asked, my voice hard. I wanted to get to bed myself. Vampires could never find it in themselves to be considerate and kill people in the early hours, so I could actually get some sleep. No, they had to kill in the middle of the night, so I would inevitably get the call at 2 a.m.

"We're waiting on the crime scene people to be done," Duncan said as he walked up to stand behind me. "Then I'll order everyone to clean up and we can head out."

"I can do it," I said through gritted teeth. Leave it to Duncan to try to take control of the situation. "I am the captain, after all."

"Of course," he said patronizingly before he walked to the other side of the alley. It was a low blow for me to remind him of my job title. He'd been trying for it for years, to no avail. Turned out that genetics was a bigger deal to the government than one might think.

I had turned away from the scene when I felt a distinct shiver run down my spine. No, not a shiver. It was damn near a convulsion. My hazel eyes danced around the darkened alleyway, looking for the source of the feeling, but there was nothing.

Shaking my head, I turned back to my team, who stood to the sidelines, watching the crime scene investigators finish up.

"Okay, we need to finish this up quickly before the actual cops catch wind of this," I said loudly so the alleyway could hear me.

Sure, the regular police couldn't touch us with our credentials, but they always slowed down the process. It was easier to skip over it completely and be on our way. Plus, with the feeling sliding up and down my back, I couldn't seem to shake the need to be out of here. Now.

"You heard her," Duncan said in a booming voice. "Let's move out!"

I stared at him for a moment before turning away to ensure everyone was listening. I tried not to let him get to me. Truly, I did. But Duncan always seemed to find a way to control every situation. I knew he couldn't help it, not with our upbringing. And really, he had always been the smarter choice for captain: smart, steady, and capable. It was just his bad luck that my bloodline trumped his.

Andrew stood next to me, a smirk on his face telling me that he knew exactly what was going on and how much it bothered me. He bumped his large arm against mine.

"Just think of the nice nap you're going to get when we get out of here," he said with a knowing grin. I never could hide my grumpiness from him.

Suddenly, I felt the shiver down my spine again, making me uneasy. Where was it coming from? My senses never steered me wrong. Something had to be out there.

I looked up and down the alley, still seeing nothing that could make me feel like I had a ten—volt battery attached to my spine. I glanced up, checking the tops of the buildings around us, and froze. A pair of bright blue eyes stared back at me, and I felt myself begin to breathe faster. I couldn't tear my eyes away from them, as if they were frozen on that one sight alone. I couldn't make anything out aside from the two orbs staring back at me in the dim lighting. The eyes seemed to watch me closely, waiting for my reaction as they danced with amusement.

"Emily, we're ready to go," Duncan said next to me, startling me out of my daze. "What are you staring at?"

His gaze followed mine to the rooftop to see nothing there at all. As if I'd imagined the whole thing. I shook my head and turned to the rest of the team as they began to load the body into the van.

"Nothing," I said quietly. "Nothing at all."

But I couldn't shake the feeling that those words couldn't be further from the truth.